A Bit of Edwardian Railway Satire 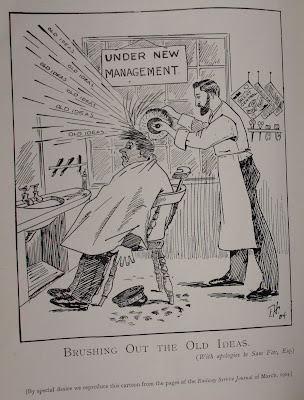 In 1902 Sam Fay became the General Manager of the ailing Great Central Railway. This cartoon from the April 1906 edition of the new and staff-run Great Central Railway Journal, which was originally published in 1904 in the Railway Service Journal, shows how many of the staff felt about the reforms that Fay brought to the company to turn it around - 'Brushing Out the Old Ideas.'
Posted by David Turner at 19:22

Welcome to 'Turnip Rail's Waiting Room.' On this site there will be no great text, not great theses, I'll leave that for for my other site - Turnip Rail. In the Waiting Room you will find small bits that I find in the course of the day, from my research, through browsing the web or in the course of writing the Turnip Rail blog. It is, essentially, a place where I can just post interesting things, in no particular order.

I hope you enjoy!

David Turner
I am a doctor of railway studies with the University of York's Centre for Lifelong learning. I am also a beer enthusiast and business historian.